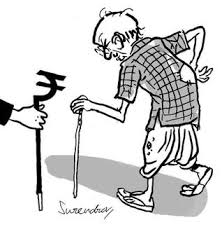 Quite pertinently meaningful a petition addressed to the Chairperson of State Bank by Ramchandra Upadhyaya, a retiree as General Manager of the Bank, in most logical an order with facts and figures, is the one that warrants a close perusal by the pensioners of all cadres in India. I, on behalf of the pensioners and all the readers of this blog, owe a solemn gratitude to him. His petition is reproduced below:

Nonpayment of Pension to 7th Bipartite Pensioners of SBI (RETIREES)

For about a decade and a half due to the Bank’s inaction.

You may perhaps be aware that as per the provisions of the Regulation 23 (16)(a) of the SBIEPFR, a member, as defined in the Regulation 2 (g), against whom disciplinary proceedings under the Rules of Service applicable to him have been continued after he ceases to be in the Bank’s service, may be paid at the discretion of the Trustees a provisional pension of an amount not exceeding the maximum amount of pension which would have been admissible to such member under these regulations on the basis of qualifying service up to the date he ceases to be in the Bank’s service.

2. The competent authority had permitted the retirement of the RETIREES comprising employees who retired either under VRS or on attaining superannuation. Nevertheless, the Bank is still paying them provisional pension as if it has initiated disciplinary proceedings against all the 32,000 and odd pensioners which is a shame. It is pertinent to note that the Regulation 23 (16) (a) also reiterates that the quantum of pension is dependent on the qualifying service put in by a member., which once again goes to prove my point that as per the Regulations 2(h), 17, 20, 22&23 (1), the Bank should have computed pension payable to the RETIREES on the basis of the average substantive salary received during the last12 months’ pensionable service. I wish to point out further that as per the Regulation 22(1), “A member shall be entitled to a pension under these regulations on retiring from the Bank’s service.” Allowing this anomalous position to continue, therefore, even after the SBIEPFR document was gazetted on 18.9.2014 makes a MOCKERY of the Regulations, which are made by none other than the Central Board of the Bank in accordance with the provision of SBI Act. Defying the provisions of SBIEPFR would mean that the Bank does not care for, the provisions of the SBI Act, the instructions of the Central Government, and its Central Board. It is indeed highly disheartening to note that the management of the Bank is dithering to act as per the provisions of the SBIEPFR even after the MOF had given directions to the Bank that it may adhere to the existing provisions of SBIEPFR, vide paragraph 2 of its letter no 4/8.6/2006-IR (Vol II)  dated 31.3.2015.If it had been the intention of the MOF to reject the Bank’s proposal made in its letter dated 27.1.2015, it would have merely sent one line reply stating that the Bank’s proposal had not been considered favourably. The purpose of the contents of the 2ndparagraph of its letter appears to be to indicate in a subtle manner that the Bank can act as per the SBIEPFR which was prepared after obtaining its prior sanction.

3. As one of the 32,000 and odd aggrieved, I would request each one of the members of the management involved in the decision making process in regard to payment of pension to honestly and dispassionately consider the following observations.

3.1. When there are a set of guidelines for handling certain types of transactions, does it not mean that depending on the amounts involved, the appropriate authorities can decide as per the guidelines? If the answer is in the negative, the entire system of delegation of powers operating in the Bank would come to a standstill. Against this background, kindly find out one reason why the Bank could not have taken steps to remove the prevailing anomalies in pension payments as per the provisions of SBIEPFR? In this connection, I attach copies of correspondence exchanged between the Bank, RBI and the Central Government at the time of introduction of Pension to the employees of the Bank. In particular, I would draw your attention to the excerpts of paragraph 4 of the DBD note dated 10.7.1964. You would observe that the sanction from the Central Government was felt necessary only for framing the Pension Rules, after consultation with the RBI. Your attention is drawn to the concluding sentence of the paragraph reading, “the Rules will thereafter be submitted to the Central Govt. by the SBI for sanction after which they will once again be submitted to the Central Board of the State Bank for final approval” Nowhere in the correspondence there was any mention that the Bank should seek the prior sanction from the CG as and when revision in salary and allowances take place. This is because the revision in pension would inevitably follow when revision in salary and allowances take place. It is surprising that revisions in pensions arising out of revision in salary and allowances are treated as amendments to Pension Regulations by the Bank. It would appear that the “abundant precaution”mindset by the Bank’s personnel led to the unwarranted practice of putting up to the CG for sanction as and when the salary and allowances of its staff was revised.

3.2.Is the Bank justified in abusing its powers to withhold a major portion of pension due to the RETIREES overlooking the Supreme Courts observations in several pension related writ petitions (which are also binding on the Bank) to deny the RETIREES, the  right to their properties?

3.3. It is strange that the management of the Bank didn’t realise that the instructions issued to its Branches vide its circular letter no CDO: PM: CIR: 34 dated 31.10.2000 were not in conformity with the provisions of SBI Employees’ Pension Fund Rules 1955 and that none including the Central Government has powers to instruct the Bank to compute pension in a manner other than what is laid down in the SBIEPFR 1955.

3.4. How does the Bank expect the Central Government to convey its approval for the recommendations contained in its letter no CDO/PM/SM/16/SPL/208 dated 27.4.2015 as the anomaly of not paying pension to the RETIREES is the Bank’s own creation as it issued its circular letter dated 31.10.2000 in anticipation of approval there for from the latter? If the Bank could issue instructions on 31.10.2000 without the sanction of the CG, why does it now need sanction from the CG for complying with the provisions of the SBIEPFR?

4. Madam, a majority of the RETIREES had joined the Bank at a time when it had about 450 branches and most of the development activities took place due to their committed and persistent efforts.Should the RETIREES be denied their rightful pension for the sole reason that while in the the nascent state they contributed their mite but when the fruits of their labour led to the flowering of  development leading to higher growth in business  bringing in its wake,larger revenue and therefore larger cake is available, they would be denied any share of it?

5.. Madam, the past experience of the Bank would indicate that SBI employees’ pension is of least priority to the CG and, most of the time, it had not responded favourably to the Bank’s just recommendations. Because of the hasty and unwarranted action of the management of the Bank in 2000, the RETIREES have been left in the lurch. The latter have been literally caught between the devil (the Bank) and the deep sea. I do not know whether Nero was fiddling when Rome was burning but I know for sure that the successive managements of the Bank, who were supposed to provide succour to the Bank’s retired employees by taking corrective action in this sordid episode, had been passive onlookers while many of the RETIREES were reeling under misery caused by denial of the quantum of pension rightfully due to them and many of them lost their lives due to abject poverty.However, you deserve to be congratulated for the initiative you had taken in the recent past in regard to removal of anomalies in pension payments, which would also become a thing of the past if you don’t take decision at the Corporate office level itself as per the SBIEPFR, which has been made by the Bank’s Central Board in accordance with the provisions of the SBI Act (23 of 1955). As most of the RETIREES are very old and I am not sure how many would be surviving when the clearance from the CG would be received, I once again urge upon you to act forthwith as the removal of anomalies would result in only repayment of the hard earned benefits of the RETIREES and no risk is therefore involved in doing so. Above all, the suggested action is fully compliant with the Rules/Regulations associated with pension payments and hence none can accuse the Bank of having acted in an illegal manner.#

# The relative enclosures to this document are not annexed for technical reasons.

11 thoughts on “Pension issues in SBI–a petition addressed to the Bank by Ramchandra Upadhyaya:”